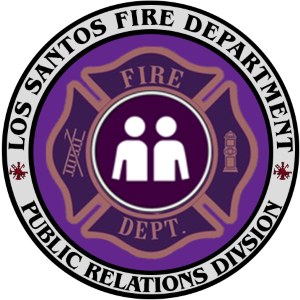 The Public Relations division for the Los Santos Fire Department is a crucial yet often understated part of any strongly functioning fire department. In modern times there are fire services across the country being privatized, and with other government agencies in action where we reside, we’re also at war for funding! It’s important to show our worth for these reasons, alongside recruitment efforts. Creating interest and educating the public is one of our greatest assets.
⠀
⠀Main Duties
⠀ ⠀
Positions and Ranking Structure
⠀ Ranking Structure ⠀
The ranking structure in Public Relations is tiered, you will start as tier one which is effectively a probationary member, after good effort shown and capability, you may advance to becoming tier two.

Tier two is is considered a standard member of the division, someone who has proved they're capable and put in work, they'll be able to explore their field in full capacity.

Tier three are Public Information Officers, they're members who've shown exceptional work and are trusted in working all aspects of Public Relations, not a specific field.

Lastly in the structure, there is Public Relations Command, consisting of the Director and Associate Director, they approve everything that goes in and out of the division from event requests to applications to join, social media posts, press releases, and more.